When Location Prompts a Staycation

“Something is Going to Happen” (blog)

I’ve always enjoyed literature that transports me to locations around the world I’ve never visited. The mysterious moors of Daphne du Maurier’s intricate gothic suspense. A Thirties-era trip along the Orient Express with a certain Belgian detective. Laos, in the mid-Seventies, with an assist from Colin Cotterill’s Dr. Siri Paiboun, the country’s crime-solving national coroner.

But given the choice, I’ll often opt for a trip closer to home, the better to revisit a familiar setting, or even one of my own, personal stamping grounds. 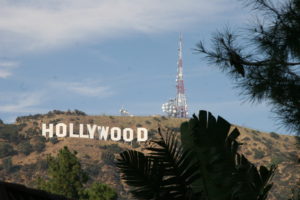 In Southern California–where I’ve lived my entire life–realtors chant like a mantra the well-known phrase, “location, location, location,” while tempting would-be buyers with ocean views that will literally cost millions. To them, it’s all about the real estate value.

Interestingly, the film and TV industry has its own notions about location. To offset what’s known as runaway production, the California Film Commission offers cuts through red tape, and financial incentives, so that productions will shoot locally. A spate of Los Angeles’s signature sites–Griffith Observatory, Union Station, the Ennis House, the Formosa Café, among them–have received more close-ups than many a starlet. They’ve also shown up on plenty of pages of So Cal-set crime novels. My staycations.

For fictional sleuths, location can be as revealing as crime solving techniques, or the weapon of choice. Figure, Harry Bosch lives in a house in Los Angeles that sits on stilts on Woodrow Wilson Drive, off twisty, turny Mulholland–with views of canyons, mountains and the iconic Hollywood Sign. For Elvis Cole, home is a classic A-frame, cantilevered above Los Angeles’s Laurel Canyon. These are fitting sites for men whose actual lives seem ever on the edge. To those of us don’t dwell up high–maybe we don’t have the dough to do it; maybe we don’t want our cats to wind up coyote food–there’s a catharsis in reading about people who do, and asking ourselves, “what if … ”

Along with mountains and canyons, So Cal has its famous coastline, and beaches, and desert communities that range from oasis-like Palm Springs (nowadays touted as a mecca for modernism), to disquieting Death Valley (the hottest place on earth, and the driest in the nation). And we can’t forget now-hip Coachella, and its loud, rowdy music-lovers. And what about all those Indian casinos? Can you feel the plot thicken? On top of which there are cool bars and hangouts – and some of them are actually historic.

Rich in geographic diversity, So Cal also affords plenty of … characters. Hollywood helps, in that regard. But don’t think of all our residents as just another pretty face, and cosmetically-enhanced bod. The (many) crime novel protagonists who live and work in So Cal must deal with folks given to despair and heartbreak and dark doings–along with the usual Seismic activity– beneath the seemingly perfect surface.

Of course, the notion of the investigator who saunters down the streets of L.A. owes everything to Raymond Chandler, who famously described the city as “lost and beaten and full of emptiness.” Chandler’s hardboiled creation, Phillip Marlowe, prowled so many actual L.A. sites–bumping into assorted lowlifes and hubba-hubba dames–that you can take a virtual tour of his haunts via fan-created websites. You can also book an actual bus ride with other aficionados, or buy a fold-up map devoted solely to Chandler’s L.A.

When tourist-pals ask me to compile a “things to see and do” list I often include a Chandler site at Hollywood and Cahuenga, explaining that the historic six-story building used to be the tallest in the neighborhood. And that “Marlowe’s office was on the sixth floor.” That’s another draw of sun streaked noir: the genre can act as a guidebook. 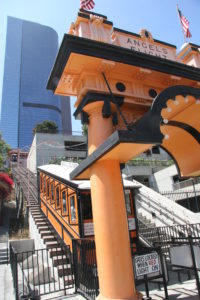 Michael Connelly’s Bosch and Mickey Haller books deliver a nifty tour of So Cal, with settings ranging from Mariachi Plaza to the Hollywood Reservoir. L.A.’s iconic (but seldom operational) funicular railway, Angels Flight, even got to be a book title. (Okay, here and there Connelly takes artistic license–or, perhaps they’re just goofs. He put L.A.’s Central Library at an intersection where it isn’t.) The series even provides tips on where to dine: Bosch likes Du-Par’s and Philippe’s, and has been spotted at the Musso & Frank Grill, which happened to be a real life favorite of Chandler’s. 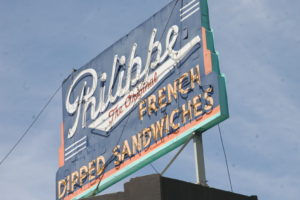 So Cal is known as a place where people reinvent themselves, where nothing is what it seems. Heck, the palm trees aren’t even native. Because truth is often stranger than fiction, writers love digging through archives to fictionalize true crime cases. That leads to evocative locations by way of the facts of the respective incidents. Walter Mosley’s Little Scarlet took us to South Central Los Angeles, and the Watt’s riots of 1965. In Rule of Capture, Ona Russell mined a myriad downtown L.A. and Hollywood locales, and even the celebrity-favored Tijuana getaway Agua Caliente, as she flashed back to 1928 and L.A.’s Julian Petroleum Corp. case, an early and notorious Ponzi scheme that defrauded 40,000 California investors.

L.A.’s most shocking and still-confounding case–the vicious 1947 murder of Elizabeth Short, nicknamed the Black Dahlia–was fictionalized by James Ellroy and, earlier, John Gregory Dunne. There have been film versions of both Ellroy’s The Black Dahlia and Dunne’s True Confessions. Should you want to raise a glass to Short’s memory, visit L.A.’s Biltmore Hotel–the last place Short was seen alive–where you can get a Black Dahlia cocktail. A wicked mix of vodka, Chambord black raspberry liqueur and Kahlua it’s served in the Gallery Bar and Cognac Room. Another great location.

South of L.A., by about forty miles, is Orange County. For a long time it was T. Jefferson Parker terrain. (He’s great at capturing those beach communities.) But others have discovered that there’s more to the area’s regional highlights than Disneyland. Jill Amadio has a series about an amateur sleuth that gets up close and cozy with Newport and Balboa Island (the latter disguised as Isabel Island); if you don’t know the town of Placentia, you will after reading Gayle Carline’s books about a former housecleaner turned investigator.

Go north of L.A., some ninety miles, to get to Santa Barbara. A fictionalized version of this gorgeous coastal community serves as the hometown of Kinsey Milhone. Only Sue Grafton calls it Santa Teresa, an homage to genre giant Ross Macdonald, who’d earlier written about Santa Barbara as the thinly-veiled Santa Teresa.

My love of familiar, richly expressive locations is interwoven with my love of Santa Barbara, which I visit often, to see family. It was there, many years ago–I wasn’t yet a teenager–that I bought a series of paperback novels at a used bookstore. At the time, I’d never heard of Macdonald, but I loved the titles … The Zebra-Striped Hearse, The Doomsters, The Chill … The covers were so lurid that I hid them from my mother. But, I couldn’t resist slumping down in the backseat of the car, to begin reading them during the drive back home.

It would be some time before I would come to understand Macdonald’s ambitious Freudian themes, and the internal struggles of his detective, Lew Archer, but I wasn’t tricked by Santa Teresa. Right off, I recognized the place as Santa Barbara. As we drove back home, along the coast, I alternately read and took in the views. I was reading about the very places we were driving past!

It was an exhilarating discovery.

So Cal is known as a place where people reinvent themselves, where nothing is what it seems. Heck, the palm trees aren’t even native. Because truth is often stranger than fiction, writers love digging through archives to fictionalize true crime cases. That leads to evocative locations by way of the facts of the respective incidents ...