Another Orange County exists beyond the sunshine, surf and shimmering national image as a haven from crime. And it’s not always pretty. 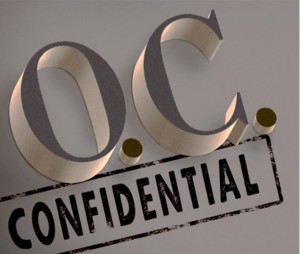 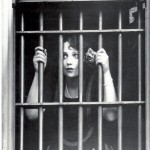 Silent-film star Bebe Daniels, at left, was clocked driving her Marmon roadster 56½ mph through largely agricultural Orange County at a time when Judge John B. Cox fined anyone going over 35, and jailed anyone doing 50.

Daniels’ courthouse trial on March 28, 1921, drew some 1,500 spectators hoping for a glimpse of the former child actress (Dorothy in the 1910 short film “The Wonderful Wizard of Oz”), who had matured into a successful ingenue under contract to Cecil B. DeMille.

Sentenced to 10 days in jail, Daniels wrote about her time in the clink for Photoplay magazine, and promptly went on to star in “The Speed Girl”—becoming the first celebrity to exploit her appearance in the O.C. crime blotter. 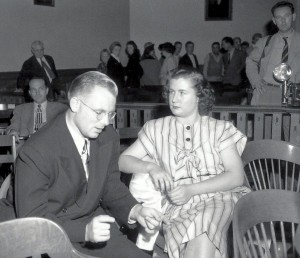 In 1947, Walter and Beulah Overell’s bodies were found after their yacht exploded in Newport Harbor. Investigators discovered unexploded dynamite and the remains of a time clock—and also determined that the wealthy couple had been bludgeoned with a ball-peen hammer.

Suspicion focused on their 17-year-old daughter, Beulah Louise, and her 20-year-old fiance, George “Bud” Gollum, because the teen stood to inherit her parents’ $500,000 estate. “We had lust, we had greed, we had frustration,” said the prosecutor during the couple’s trial later that year. “These are the raw materials out of which murders are made.” But the young lovers were acquitted—and went their separate ways.

The case might have been forgotten except that it led to the establishment of the county’s first crime lab in a converted women’s restroom on the second floor of the old Sycamore Street County Jail, staffed by a single criminologist. Today’s modern lab is administered through a partnership of the sheriff-coroner, the district attorney, and the county CEO, and has more than 150 staff members working in a 100,000-square-foot facility. It housed the first local law enforcement DNA lab in the western U.S., initiated the state’s first local automated fingerprint ID system, and helped introduce portable breath-alcohol testing devices


THERE ARE BAD GUYS
THEN THERE ARE REALLY BAD GUYS 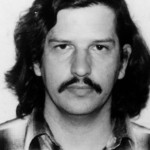 WILLIAM BONIN
Rap sheet A paroled sex offender, the “Freeway Killer”—shown here—raped, tortured, and murdered at least 21 boys and young men in 1979 and ’80. Four of his victims’ bodies were found in Orange County, three along Ortega Highway.
Current status Dead. Bonin’s 1996 execution at San Quentin was the state’s first by lethal injection.
Certifiably evil? Bonin said in a final interview that victims’ families looking for closure would find out “that’s not the case.”

ADAM YAHIYE GADAHN
Rap sheet Formerly of Santa Ana’s West Floral Park, Gadahn was indicted in 2006 for treason and material support to al-Qaida, and is one of the FBI’s Most Wanted Terrorists. He’s the first person in the U.S. to face treason charges since the 1950s.
Current status Gadahn, 36, converted to Islam at age 17 and has various aliases. The State Department is offering up to $1 million for information leading to his arrest.
Certifiably evil? A 2011 video finds Gadahn urging American Muslims to purchase weapons at gun shows to carry out random attacks.
Post-publication update On April 23, 2015 President Obama announced that Gadahn had been killed three months earlier, in a CIA drone strike in Pakistan.

RANDY STEVEN KRAFT
Rap sheet Convicted in Orange County of murdering 16 young men between 1972 and 1983, the 1963 Westminster High grad raped, tortured, and mutilated his victims, the first of whom was found in a ravine off Ortega Highway.
Current status On San Quentin’s death row since 1989.
Certifiably evil? Sometimes called the “Scorecard Killer” because he kept a coded 61-name list that authorities believe represents his many victims. 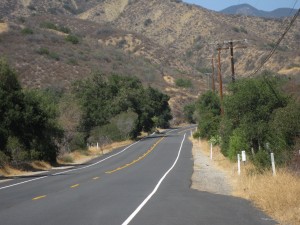 The rugged, curvy 44-mile ride that links Orange and Riverside counties is known for its scenic beauty, its access to Cleveland National Forest—and as a repository for the dead. Here are some of the more notable cases.

Florence Nancy Brown, 31, of El Toro, is found in 1970 about 19 miles southeast of Lake Elsinore, the victim of devil worshipper Steven Craig Hurd, who died in prison.

Wayne Joseph Dukette, 30, of Long Beach, is found in 1971 within half a dozen miles of the 5 Freeway, cause of death unknown. Investigators believe he was one of serial killer Randy Kraft’s first local victims.

Mark Andrew Orach, 21, of Ottawa, Canada, is found in 1976, dead of a gunshot to the head, a victim of “Trash Bag Murderer” Patrick Kearney.

Dennis Frank Fox, 17, of Long Beach is found in 1979 in Caspers Wilderness Park. He was sodomized and strangled by “Freeway Killer” William Bonin.

Glen Norman Barker, 14, of Huntington Beach, and Russell Duane Rugh, 15, of Garden Grove, both sexually assaulted and strangled, are found in 1979 halfway between Mileposts 16 and 17, where “Freeway Killer” William Bonin left them.

James Trotter’s charred bones are found in 1990 off the highway in Riverside County; six more years would pass before they are identified. The Costa Mesa 13-year-old went missing in 1979. His killer, Newport Beach pedophile James Lee Crummel, was convicted in 2004, and hanged himself in 2012 at San Quentin.

Kenneth Stahl, 57, a Huntington Beach anesthesiologist, and his optometrist wife, Carolyn Oppy-Stahl, 44, are found shot to death execution style in 1999 near an emergency call box in what was found to be a murder-for-hire plot gone wrong.

Samantha Runnion, of Stanton, is found in 2002 at an overlook near Lake Elsinore; the 5-year-old was sexually assaulted and asphyxiated. Found guilty of her murder, Alejandro Avila remains on San Quentin’s death row. Erin Runnion, Samantha Runnion’s mother, today advocates for children’s rights and speaks publicly about the danger of child predators. She is the founding director of the Joyful Child Foundation, which works to prevent crimes against children by presenting child safety programs, public and private.

Jane Bautista, 41, of Riverside is found dead in 2003, five miles west of the Riverside County line. Her head and hands are missing. Son Juan Bautista admits to the gruesome killing.

The remains of an Unidentified woman, at least 30 years old, are found in January 2014 in a remote section of Caspers Wilderness Park. Her death is deemed suspicious; clothing at the scene includes a sports jacket embroidered with “Coach Williams.”

LOCAL CASES THAT MADE COMPELLING TV 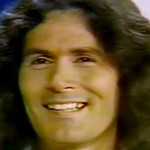 When Rodney Alcala, right, appeared on the game show in 1978, the 35-year-old photographer was in the midst of a killing spree. He was sentenced to death for killing four California women and a 12-year-old Huntington Beach girl, and later extradited to New York where, in 2013, he pleaded guilty to killing two women in the ’70s. He’s on California’s death row.

Murder at Sea
The 2004 killings of Thomas and Jackie Hawks, tied to the anchor of their yacht and tossed overboard off Newport Beach, got extra media scrutiny because orchestrator Skylar Deleon, above, a would-be child actor, proved a fascinating TV interview subject on news programs such as “20/20.”

Cinnamon Brown
The 1985 case of the Garden Grove girl—just 14 when she killed her stepmother at the urging of her father, David Brown—was the subject of the 1991 TV movie “Love, Lies and Murder,” starring Moira Kelly as Cinnamon, as well as two true-crime books. She was paroled at 21 by the California Youth Authority after serving eight years; Brown was serving a life sentence without parole when he died in March.

The Evil Twin
At least four television documentaries, including one for Investigation Discovery’s “Evil Twin” docudrama series, above, have examined the 1996 Irvine attempted murder of “good twin” Sunny Han by her identical twin, Jeen “Gina” Han, who now is serving 26 years to life.

O.J. Simpson
The 1994 murders of Simpson’s former wife, Nicole Brown Simpson, and her friend Ron Goldman are legendary for their TV ubiquity, which included coverage of everything from Simpson’s slow-speed chase on the 405 Freeway, to daily trial updates, to interviews with Nicole’s mother and sister from Dana Point.


“Coast TV Beats Ink Outa Papers as Sex Slaying Stirs Populace” proclaimed The Billboard on June 2, 1951, during one of many precedent-setting local cases involving crime and the media. Patty Jean Hull was just 10 when she was abducted from a Buena Park theater by Henry Ford McCracken, a hillbilly musician with a history of sex-crime arrests. Three days after her May 19 disappearance, KTTV Channel 11 sent remote units and a film crew from Los Angeles to cover an investigation that previously would have been deemed too shocking for TV. A day later, KTLA Channel 5 joined in. 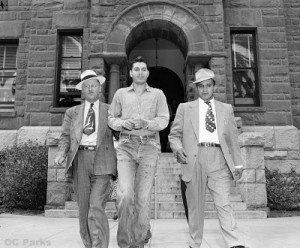 In an era of family-friendly programs such as “I Love Lucy,” news cameras were rolling when lawmen entered McCracken’s auto court cabin, and when Patty’s body was found in a shallow grave in Live Oak Canyon. They also covered the grand jury’s indictment of McCracken, center above, who was executed in San Quentin’s gas chamber in 1954. 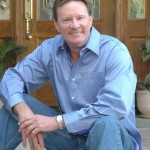 FICTION
T. JEFFERSON PARKER
The prolific crime writer sheds some light on the dark side of O.C.


–What makes the county compelling, crime-wise?
It’s the whole idea of “sunshine noir.” How can you can have a place as beautiful as Orange County, and yet have a guy like Randy Kraft cruising around, or [Nightstalker] Richard Ramirez traveling down from L.A. It’s just cognitive dissonance when you have that happening around the planned community of Irvine. It doesn’t make any sense, and that’s what’s interesting about it.

–What role do real O.C. crimes play in your books?
We’ve all heard about a lot of the crimes that have taken place here over the decades, and some are referenced in my books. But for me, headlines are factual stage dressing.


–Your books favor South County as a locale.
To a middle-class suburban Tustin boy, arriving in Laguna Beach in 1980 was like showing up on a distant shore. It was so romantic, so different, so worldly. Then there’s the Pacific and the jagged coastline and the whole culture of the beach – the artists and the history. There’s something very singular about places like Laguna and Newport.


–But isn’t the county more than that?
To me it was always puzzling why the WASP Republication stereotype persisted. You could hardly talk to people outside of O.C. without them mentioning John Birchers and John Wayne Airport. But that’s never been true. Orange County is very diverse and there are some rough-ass places. It’s a writer’s paradise.

–In recent years you’ve strayed from O.C. settings.
True. I’ve been crossing county lines and genres [Parker relocated from O.C. to north San Diego County in 2000.] But down the road I’d love to catch up with some of my earlier characters, maybe Silent Joe, or the Becker brothers from “California Girl.” And I’ll see how Orange County has changed. I’m only saying adios for now. 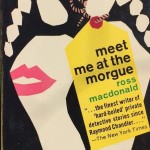 The papers of acclaimed mystery writer Kenneth Millar—known to readers as Ross Macdonald, creator of hardboiled SoCal detective Lew Archer—fill some 59 boxes, spanning 25 linear feet at UC Irvine in the Department of Special Collections. Our surveillance yielded a few surprises.


The seaside town’s trippy drug-dealing crime syndicate has captivated a long list of writers – and Hollywood.

JOE ESZTERHAS. The Rolling Stone-correspondent-turned-screenwriter dubbed the brotherhood the “hippie mafia” in his December 1972 two-parter that detailed the takedown of the syndicate: 200 narcs descending on Laguna, 40 arrests and 29 indictments, and a haul that included 1.5 million LSD tablets and 2½ tons of hash.

STEWART TENDLER & DAVID MAY. These British authors had a go at the surfers-turned-acid evangelists in their 1984 book, “The Brotherhood of Eternal Love: From Flower Power to Hippie Mafia, The Story of the LSD Counterculture.”

TIMOTHY LEARY. The LSD guru was among the indicted, and later wrote about his time with the brotherhood in his 1989 autobiography, “Flashbacks.”

NICK SCHOU. The OC Weekly writer examined the surreal story in 2010’s “Orange Sunshine: The Brotherhood of Eternal Love and Its Quest to Spread Peace, Love, and Acid to the World.”

DON WINSLOW. The novelist gave the saga a fictional spin in “Savages,” which became the 2012 Oliver Stone movie of the same name. 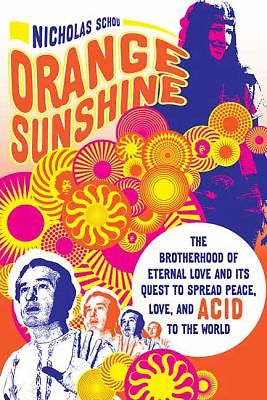 ORTEGA HIGHWAY: The rugged, curvy 44-mile ride that links Orange and Riverside counties is known for its scenic beauty, its access to Cleveland National Forest—and as a repository for the dead.