On A Tragic Anniversary, Remembering JFK

Fifty years after gunshots rang out in Dallas’ Dealey Plaza, the collective memory continues to celebrate the life and achievements of John F. Kennedy, and to ponder his death.

Authors and publishers are also remembering the November 22nd  anniversary with dozens of new books on Kennedy’s assassination and legacy. We’ve poured through the stacks to point readers toward some of the best. 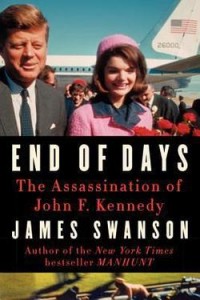 James Swanson, author of the riveting 2006 bestseller Manhunt: The 12-Day Chase for Lincoln’s Killer, brings his storytelling acumen and research skills to the event he calls “the great American tragedy.”

Swanson’s End of Days begins with Lee Harvey Oswald meticulously planning a killing. He has maps, surveillance photos, a planned escape route, and more. His intended target: General Edwin A. Walker, a Dallas-based ultra-conservative who considered JFK a political foe. But Oswald’s assassination attempt fails; his bullet comes within an inch of Walker’s head.

Oswald isn’t a suspect in the Walker incident. It’s only after he succeeds at the next assassination attempt—on the life of JFK—that investigators make the connection. Swanson’s linear narrative positions all this as it happens. He does the same in detailing the forces that bring Kennedy and his wife Jacqueline to Texas, ultimately putting them in the crosshairs of Oswald’s rifle, and the reader in a “you are there” edge-of-the-seat thriller. 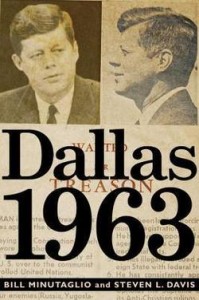 Dallas 1963 masterfully describes the sociological and political forces that made the city a hotbed of reactionary activism. Bill Minutaglio—whose Texas-themed books include biographies of George W. Bush and Molly Ivins—and Texas scholar Steven L. Davis vividly describe the collision of the colorful characters who gave Dallas its foreboding renown.

Among them: Gen. Walker, the once-celebrated military general who went rogue; oil baron H.L. Hunt; Dallas Morning News publisher Ted Dealey; and incendiary congressman Bruce Alger. At odds with JFK’s foreign policies, they also resent the President’s domestic agenda, notably on civil rights. Into this toxic atmosphere came Lee Harvey Oswald, an avowed Marxist who had resentments of his own.

As authoritative as it is readable, Dallas 1963 is a significant addition to the JFK canon. 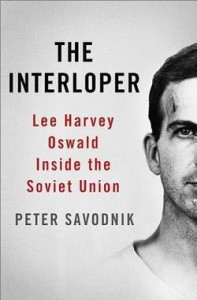 Peter Savodnik, who once reported from Moscow, is no conspiracy theorist. He believes Oswald did it—and acted alone. The nagging question is, why? To find the answer, Savodnik traces Oswald’s three years in the Soviet Union from 1959 to 1962. The Interloper gets its title from Oswald’s lifelong efforts to escape his old life and insert himself into a new one.

Oswald’s youth was chaotic, in large part because of his hectoring mother, Marguerite. Dropping out of high school, he joined the Marines. He also discovered Marxism. Seeking a more fulfilling life, he journeyed to the Soviet Union where he perplexed the KGB (as a defector, he had little to offer), enjoyed success with women (who found him exotic), and ultimately married. But as Savodnik details, the lifelong outsider didn’t fit in; returning to America with his Russian bride, his anger and frustrations festered. Over the next 17 months Oswald moved nine times, eventually making his way to Dallas. Ever the interloper, his disconnectedness led to his actions on November 22, 1963. In a sense, says Savodnik, it was as much a suicide attempt as it was a murder. 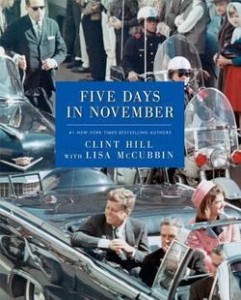 In Five Days in November, Clint Hill and co-author Lisa McCubbin, who previously teamed for Mrs. Kennedy and Me, focus on a timeframe that begins just before the trip to Dallas, and ends with a nation in mourning. As the Secret Service agent in charge of the first lady’s detail, Hill is known for leaping onto the back of the car that carried the injured JFK, pushing Jackie back into the seat.

Five Days in November includes a reproduction of the trip agenda, a plan of Air Force One and a chart of the Dallas motorcade—as well as seldom-seen photos. But the highlights are Hill’s personal remembrances, like hearing the first lady practicing her Spanish, while en route to San Antonio, in anticipation of a speech to Latino constituents.

The text is straightforward; the embellishments come from the heart, as when Hill relates the backstory of John-John’s famed salute at his father’s funeral. Or when the first lady takes Hill’s hand, during the somber flight carrying the president’s body from Dallas to D.C., and asks, “What’s going to happen to you now, Mr. Hill?” 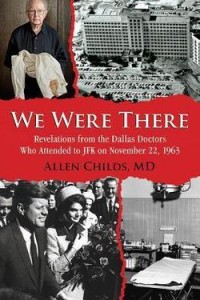 Other first-hand observers of the events in Dallas include the medical professionals who have been quoted in a spate of books over the years about what took place at Parkland Memorial Hospital, where the mortally wounded President was rushed.

At long last, there is a single volume of remembrances, compiled by Dr. Allen Childs, who was on the scene.

We Were There includes accounts of more than 40 Parkland staff members. Some are tearful, some insightful, some strictly by the book; all underscore the sense of urgency—and the craziness—that resonated throughout the hospital.

There’s Jackie, silently circling the emergency room, holding something in her cupped hands. Nudging a doctor, she hands him “a large chunk of her husband’s brain tissue.” In the halls, angry Secret Service agents brandish machine guns. Outside, a medical student watches as an ornate casket is carried in.

It’s at Parkland that the seeds of conspiracy theories take root, beginning with professional differences over where the bullets entered the president’s body. In one startling recollection, a doctor says a Warren Commission representative admitted to him that witnesses were prepared to testify that “they saw somebody shoot the president from the front,” but the commission didn’t want to interview them.

No wonder Skyhorse, the publisher of We Were There, has a number of conspiracy titles among the 26 JFK assassination books it is publishing this year, including The Man Who Killed Kennedy, The Case Against LBJ and They Killed Our President: 63 Reasons to Believe There Was a Conspiracy to Assassinate JFK. 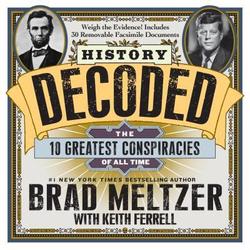 Another probe of conspiracy theories is History Decoded: The 10 Greatest Conspiracies of All Time, a lively and cleverly packaged exploration. Adapted from the History Channel program “Brad Meltzer’s Decoded,” the book presents conspiracies in countdown format: 10, 9, 8 … with Kennedy’s assassination in the number-one spot.

Authors Meltzer and Keith Ferrell review the top 10 theories pointing to a conspiracy in JFK’s death. Among them (at #9): the fact that the findings of a review by the U.S. House of Representatives’ Select Committee on Assassinations, released in 1979, differed with those of the Warren Commission.

This book comes with envelopes of removable facsimile documents for each conspiracy; for JFK, the envelope contains the order form for Oswald’s $19.95 rifle that may—or may not—have changed history. 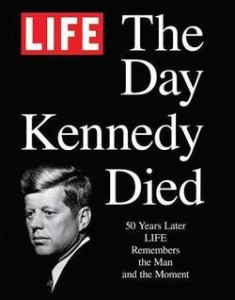 Weighing in at more than five pounds, the striking commemorative LIFE The Day Kennedy Died: 50 Years Later recalls the iconic magazine’s illustrious relationship with the Kennedys, as well as the dark days in Dallas.

A foreword by historian David McCullough assesses JFK’s significance. (It was JFK’s passion for history that triggered McCullough’s professional calling.) There are biographical pages, family portraits—including Cecil Stoughton’s wonderful shots of Caroline and little John-John cavorting in the Oval Office—and sections on the murder and its aftermath. It was LIFE that first published images from Abraham Zapruder’s legendary 26-second 8mm home movie. Here, all 486 frames are reproduced in an eight-page fold-out. The book also includes a removable reprint of the original LIFE issue that followed the assassination. 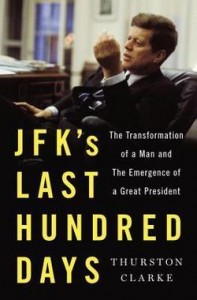 Historian Thurston Clarke delves into the final chapter of Kennedy’s presidency in JFK’s Last Hundred Days. This compelling page-turner  follows JFK from August 1963—just after the death of his two-day-old son, Patrick Bouvier Kennedy—to that fateful day in Dallas. The mystery Clarke sets out to solve is not who killed JFK, but rather, who the president was and where he might have led us.

Clarke makes a convincing argument that, had he lived, JFK would have opted for a 1964 running mate other than Lyndon Johnson—dubbed Uncle Cornpone by Kennedy and his crowd—and that, following his re-election, he would have gotten the U.S. out of Southeast Asia.

Domestically, Clarke contends, Kennedy would have pursued a strong civil rights agenda. (One anecdote finds JFK watching Martin Luther King Jr.’s “I Have a Dream” speech on the White House’s only TV, a 13-inch black and white with rabbit ears—on which Caroline regularly watched “Lassie.”)

Detailed in both political and personal revelations, JFK’s Last Hundred Days does not delve into the assassination, though the stage is set. The morning they left for Dallas, JFK warned Jackie, “We’re heading into nut country today.” 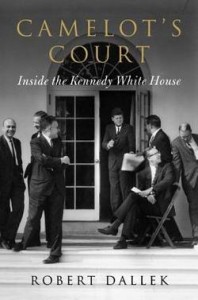 After the assassination, Jackie and some Kennedy cabinet members promoted a romanticized vision of the late president. It started with Jackie’s interview with LIFE magazine, in which she compared the Kennedy White House to King Arthur’s Court. A spate of glowing biographies followed. Myths are one thing, facts are another.

Camelot’s Court is an unvarnished account of JFK’s inner circle (nicknamed the “Ministry of Talent”). Robert Dallek, author of An Unfinished Life: John F. Kennedy, 1917-1963, goes behind closed doors as JFK deals with the communist advance and the foreboding possibility of nuclear war. Cuba and Vietnam dominate Kennedy’s agenda, as well as this book—especially as the conflict in Southeast Asia grows.

But Dallek has cleverly spiced up his scholarly reporting. In doing so, he humanizes the sometimes brittle politician who—when facing the Cuban missile crisis—confided to a lover, “I’d rather my children be red than dead.”

Dallek takes a measured view about what might have happened had JFK not been killed. Perhaps he’d have been re-elected; it’s “plausible” he would have gotten the U.S. out of Vietnam.

Today, what’s certain is Kennedy’s hold in the American psyche. No assassin’s bullet could snuff that out.

Today, what’s certain is Kennedy’s hold on the American psyche. No assassin’s bullet could snuff that out.