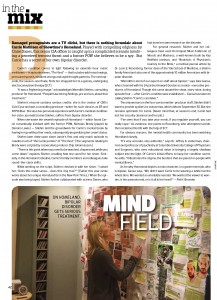 Damaged protagonists are a TV cliché, but there is nothing formulaic about Carrie Mathison of Showtime’s “Homeland.” Played with compelling edginess by Claire Danes, this senior CIA officer is caught up in a complicated scenario involving a perceived terrorist threat and a former American POW she believes to be a spy. But Carrie has a secret of her own: bipolar disorder.

“It was a frightening image,” acknowledges Meredith Stiehm, consulting producer for “Homeland.” “People have strong feelings, pro and con, about that treatment.”

Stiehm’s résumé contains serious credits: she is the creator of CBS’s “Cold Case,” and consulting producer-writer for such classics as “ER” and “NYPD Blue.” She also has personal experience with Carrie’s medical condition: her sister, journalist Jamie Stiehm, suffers from bipolar disorder.

When she wrote the seventh episode of “Homeland“ – which found Carrie romantically involved with the former POW, Nicholas Brody (played by Damien Lewis) – Stiehm laid the groundwork for Carrie’s mental break by having her go without her meds, subsequently jeopardizing her covert status.

Stiehm later drew upon her sister Jamie’s first and only manic episode to cowrite much of “the Carrie portion” of “The Vest.” (The segments relating to Brody were scripted by coexecutive producer Chip Johannessen.)

“There is this point where you need to be watched, chaperoned, while you come down,” explains Stiehm, recalling how she cared for her sister. Similarly, in the “Homeland” storyline, Carrie’s family members and colleagues take round-the-clock shifts.

While working on the script, Stiehm checked in with her sister. “I asked her, ‘Does this make sense? Does this ring true?’” (Earlier this year Jamie wrote about her unique “Homeland” tie in The New York Times.) When the episode was being taped, Stiehm further collaborated with actress Danes, who had done her own research on the disorder.

For general research, Stiehm and her colleagues have used An Unquiet Mind: A Memoir of Moods and Madness, a well-known book by Kay Redfield Jamison, and “Brainsick: A Physician’s Journey to the Brink,” a medical journal article by Dr. Leon E. Rosenberg, former dean of the Yale School of Medicine, a Stiehm family friend and also one of the approximately 10 million Americans with bipolar disorder.

“Meredith is kind of our expert on staff about bipolar,” says Alex Gansa, who is teamed with his 24 partner Howard Gordon as creator-executive producers of “Homeland.” Though she came aboard the show, story-wise, during episode four – after Carrie’s condition was established – Gansa has taken to calling Stiehm “Carrie’s caretaker.”

The only woman on the four-person, writer-producer staff, Stiehm didn’t want to provide spoilers to season two, which debuts September 30. But she remains optimistic for Carrie. (Never mind that, at season’s end, Carrie had lost her security clearance and her job.)

“I’ve seen that if you take your meds, if you regulate yourself, you can really cope.” As evidence, she points to Rosenberg, who attempted suicide, then reclaimed his life with the help of ECT.

For obvious reasons, the mental health community has been watching “Homeland” closely.

“It’s very accurate, very authentic,” says Dr. Jeffrey A. Lieberman, chairman and professor of psychiatry at Columbia University College of Physicians and Surgeons, who sees educational value in bringing a largely shadowy subject into the light. Of Carrie’s initial efforts to keep her condition secret, he adds, “It illustrates the stigma, the burdens that are placed on people with mental illness.”

As for why “Homeland“ depicts a main character, in a government job, who is bipolar, Gansa says, “We didn’t want Carrie to be wearing a white hat the whole time. We wanted an unreliable narrator. We wanted the viewer to wonder, is her paranoia real, or is it all in her head?”