A Preteen Primer for Parents

Britney, Christina, Eminem: Are Your Child’s Role Models Too Raunchy? 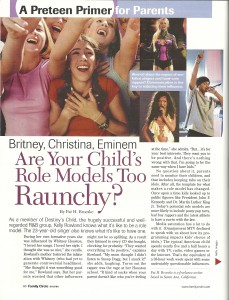 During her own formative years she was influenced by Whitney Houston. “I loved her songs. I loved her style. I thought she was so nice,” she recalls. Rowland’s mother fostered the infatuation with Whitney (who had yet to generate controversial headlines). “She thought it was something good for me,” Rowland says. But her parents worried that other influences might not be so uplifting. As a result they listened to every CD she bought, checking for profanity. “They wanted everything to be positive,” explains Rowland. “My mom thought I didn’t listen to Snoop Dogg, but I snuck it!” she adds, laughing. Turns out the rapper was the rage at her Houston school. “It kind of sucks when your parent doesn’t like who you’re feeling for at the time,” she admits. “But…it’s for your best interests. They want you to be positive. And there’s nothing wrong with that. I’m going to be the same way when I have kids.”

No question about it, parents need to monitor their children, and that includes keeping tabs on their idols. After all, the template for what makes a role model has changed. Once upon a time kids looked up to public figures like President John F. Kennedy and Dr. Martin Luther King. Today’s potential role models are more likely to include pouty pop tarts, bad boy rappers and the latest athlete to have a run-in with the law.

Media saturation has a lot to do with it. (Omnipresent MTV declined to speak with us about how its programming impacts kids’ choice of idols.) The typical American child spends nearly five and a half hours a day with TV, radio, video games or the Internet. That’s the equivalent of a 38-hour work week spent with some undeniably questionable influences.

Tweens are especially vulnerable because the years between ages 10 and 13 are rife with experimentation. “They have a real struggle with self-identity and self-esteem issues. They’re working through who they are,” says Shepherd Smith, president of the Institute for Youth Development based in Washington, D.C., an organization that promotes positive choices and behaviors for children.

In shaping their identities, tween girls reach for cosmetics and try different hairstyles and fashions. Naturally they mimic those they admire. When teen songstress Avril Lavigne wore a sleeveless T-shirt with a tie, girls everywhere raided their dad’s tie rack. Those who grew up watching the Olsen Twins are target buyers for Mary-Kate and Ashley’s fashion line at Wal-Mart. And let’s not forget the boys, who want to wear the same brand athletic shoe as the one touted by iconic sports stars.

But role models don’t just impact fashion. They can also influence behavior. “There’s a huge correlation between early debut of unhealthy behaviors and lifetime negative consequences and addictions, such as smoking, drinking, drug use and sexual activity,” Smith points out. 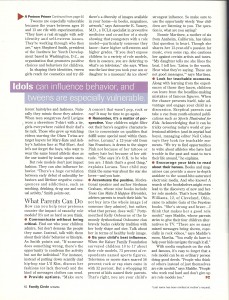 What Parents Can Do

How can you help your preteens counter the impact of raunchy role models? It’s not as hard as you think.

● Communicate without being critical. Find out who your children admire, but don’t demean the people they name. Instead, talk with them about their idols’ behavior or lifestyle. As Smith points out, “If someone does something wrong there’s the opportunity to condemn the activity but not the individual.” For instance, instead of putting down scantily clad hip-hop star L’il Kim, discuss her fashions (or lack thereof) and the kind of messages clothes can send.

● Provide options. “Make sure there’s a diversity of images available in your home—in books, magazines, artwork,” says Antronette K. Yancey, M.D., a UCLA specialist in preventive medicine and co-author of a study showing that youngsters with a role model—particularly someone they know—have higher self-esteem and higher grades. “If you don’t expose children to a variety of role models, then in essence, you are deferring to what’s on television,” she says. When was the last time you took your son or daughter to a museum? An ice show? A concert that wasn’t pop, rock or rap? It may be time to go again.

● Remember, it’s a matter of perspective. Your children might filter out their hero’s negative characteristics to concentrate on qualities that fulfill some special need within themselves. Lorana (last name has been omitted at mother’s request), a 12-year-old from San Francisco, is drawn to the singer Pink not because of her tattoos or spikey hair but because of her attitude. “She says it’s O.K. to be who you are. I think that’s a good thing,” explains Lorana. Your child may think the same way about the star she loves—and you hate.

● Accentuate the positive. Motivational speaker and author Stedman Graham, whose nine books include Teens Can Make It Happen (Fireside), advises parents to teach their kids “to not buy into the whole image [of someone they admire], but rather, what that person does well.” Potty-mouthed Kelly Osbourne of the famously dysfunctional Osbourne clan bravely bucks celebrity tradition with her body shape and size. Talk about her in terms of healthy body image.

● Be your child’s best influence. When the Kaiser Family Foundation surveyed children 10 to 17 about their role models, 73 percent of respondents named sports figures. Television or movie stars snared 56 percent; rock or rap stars came in with 32 percent. But a whopping 92 percent of kids named their parents. That’s right, you are your child’s strongest influence. So make sure to use the opportunity wisely. Your children are listening to you. The question is, what are you saying?

Bonnie Martinez, a mother of six from Anaheim, California, has taken that question to heart. Though she shares her 13-year-old’s passion for music, even some rap, she cautions her against certain artists and tunes. “My daughter tells me she likes the beat. I tell her, ‘Listen to the words. Hear what they are saying. These are not good messages,’” says Martinez.

● Look for teachable moments. Along with learning from the experiences of those they know, children can learn from the headline-making mistakes of famous figures. When the chance presents itself, take advantage and engage your child in a discussion. Skeptical parents can take a cue from youth-oriented publications such as Sports Illustrated for Kids. Acknowledging that it can be tricky covering today’s world of professional athletes (and its myriad bad boys), managing editor Neil Cohen says they look for teachable moments. “We try to find opportunities to write about athletes who have had trouble in the past and want to turn their life around,” he explains.

● Encourage your kids to read about their heroes. Books and magazines can provide a more in-depth antidote to the sound-bite saturated electronic media. And who knows? A search of the bookshelves might even lead to the discovery of new and better role models. That’s how Maddie Williams, 12, of Cleveland, Ohio, came to admire Gaia of the Fearless books. “She’s strong and brave…I think that makes her a good role model,” says Maddie, whose parents strive to give their four children alternatives to TV. “There are so many mixed messages being shown, especially in rock videos,” says Maddie’s mom, Martha. “You really do have to help your kids navigate through it all.”

The typical American child spends nearly five and a half hours a day with TV, radio, video games or the Internet. That’s the equivalent of a 38-hour work week spent with some undeniably questionable influences.