BILLY CAMPBELL IS THE LATEST PERFORMER TO PORTRAY THE U.S. PRESIDENT MOST SCHOLARS RANK AS THE COUNTRY’S FINEST 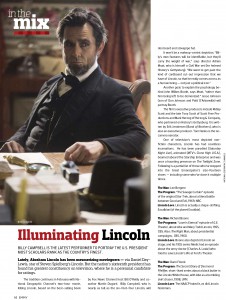 Lately, Abraham Lincoln has been mesmerizing moviegoers – via Daniel Day Lewis, star of Steven Spielberg’s “Lincoln.” But the nation’s sixteenth president has found his greatest constituency on television, where he is a perennial candidate for ratings.

The tradition continues in February with National Geographic Channel’s two-hour movie, “Killing Lincoln,” based on the best-selling book by Fox News Channel host Bill O’Reilly and co-author Martin Dugard. Billy Campbell, who is nearly as tall as the 6-foot-4 Lincoln, will don beard and stovepipe hat.

It won’t be a makeup-centric depiction. “Billy’s own features will be identifiable, but they’ll carry the weight of war,” says director Adrian Moat, who is himself a Civil War vet (he helmed History Channel’s “Gettysburg”). “We want to get past the kind of cardboard cut-out impression that we have of Lincoln, so that he really comes across as a human being—not just a political icon.”

Another goal: to explain the psychology behind John Wilkes Booth, says Moat, “rather than him being left to be demonized.” Jesse Johnson (son of Don Johnson and Patti D’Arbanville) will portray Booth.

The film’s executive producers include Ridley Scott and the late Tony Scott of Scott Free Productions and Mark Herzog of Herzog & Company, who partnered on History’s “Gettysburg.” It is written by Erik Jendresen (“Band of Brothers”), who is also an executive producer. Tom Hanks is the on-camera narrator. 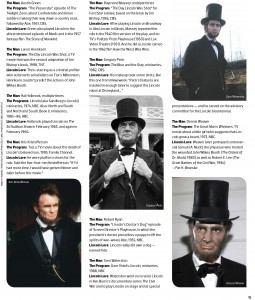 One of television’s most depicted non-fiction characters, Lincoln has had countless incarnations. He has been parodied (“Saturday Night Live”), animated (MTV’s “Clone High U.S.A.”), beamed aboard the Starship Enterprise, and was once a haunting presence on “The Twilight Zone.” Following is a partial list of those who’ve stepped into the Great Emancipator’s size fourteen shoes—including some who’ve done it multiple times.

The Man: Lee Bergere
The Program: “The Savage Curtain” episode of the original “Star Trek,” about a literal battle between Good and Evil, 1969, NBC.
Lincoln Lore: Lincoln is actually a shape-shifting Excalbian (of the planet Excalbia).

The Man: Richard Boone
The Programs: “Love is Eternal” episode of “G.E. Theater,” about Abe and Mary Todd Lincoln, 1955, CBS. Also, “The Right Man,” about presidential campaigns, CBS, 1960.
Lincoln Lore: Boone also depicted Lincoln on stage, and his 1955 series “Medic” had an episode about the Army doctor (Dr. Charles A. Leale) who tried to save Lincoln’s life at Ford’s Theater.

The Man: Dann Florek
The Program: “The Secret Diary of Desmond Pfeiffer,” short-lived series about a black butler in the Lincoln White House, with Abe as a bumbling skirt chaser, 1998, UPN.
Lincoln Lore: The NAACP hated it, as did Lincoln historians.

The Man: Austin Green
The Program: “The Passersby” episode of “The Twilight Zone,” about Confederate and Union soldiers making their way down a country road…followed by Abe, 1961, CBS.
Lincoln Lore: Green also played Lincoln in the aforementioned episode of Medic and in the 1957 fantasy film The Story of Mankind.

The Man: Lance Henriksen
The Program: “The Day Lincoln Was Shot,” a TV movie that was the second adaptation of Jim Bishop’s book, 1998, TNT.
Lincoln Lore: Then-starring as a criminal profiler who outsmarts serial killers on Fox’s “Millennium,” Henriksen couldn’t predict the actions of John Wilkes Booth.

The Man: Kris Kristofferson
The Program: “Tad,” a TV movie about the death of Lincoln’s beloved son, 1995, Family Channel.
Lincoln Lore: He wore platform shoes for the role. Said the five-foot-ten Kristofferson: “If I’d had more time, I would have gotten thinner and taller before the movie.”

The Man: Raymond Massey, multiple times
The Program: “The Day Lincoln Was Shot” for “Ford Star Jubilee,” based on the book by Jim Bishop, 1956, CBS.
Lincoln Lore: After playing Lincoln on Broadway in “Abe Lincoln in Illinois,” Massey repeated the role in the 1940 film version of the play, and on TV’s “Pulitzer Prize Playhouse” (1950) and “Lux Video Theatre” (1951). And he did a Lincoln cameo in the 1962 film “How the West Was Won.”

The Man: Gregory Peck
The Program: “The Blue and the Gray,” mini-series, 1982, CBS.
Lincoln Lore: His makeup took some shots, like this one from Newsweek: “Peck’s features are masked in enough latex to suggest the Lincoln robot at Disneyland…”

The Man: Robert Ryan
The Program: “Lincoln’s Doctor’s Dog” episode of “Screen Director’s Playhouse,” in which the president’s doctor prescribes a puppy to lift the spirits of war-weary Abe, 1955, NBC.
Lincoln Lore: Lincoln really did own a dog – named Fido.

The Man: Sam Waterston
The Program: “Gore Vidal’s Lincoln,” mini-series, 1988, NBC.
Lincoln Lore: Waterston went on to voice Lincoln in Ken Burns’ documentary series “The Civil War” and to play Lincoln on stage and at special presentations – and he served on the Advisory Committee for the Lincoln bicentennial.

The Man: Dennis Weaver
The Program: “The Great Man’s Whiskers,” TV movie about a little girl who suggests that Lincoln grow a beard, 1973, NBC.
Lincoln Lore: Weaver later portrayed controversial Samuel A. Mudd, the physician who treated the wounded John Wilkes Booth (“The Ordeal of Dr. Mudd,” 1980) as well as Robert E. Lee (“The Great Battles of the Civil War,” 1994).

One of television’s most depicted non-fiction characters, Lincoln has had countless incarnations. He has been parodied ("Saturday Night Live"), animated (MTV’s "Clone High U.S.A."), beamed aboard the Starship Enterprise, and was once a haunting presence on "The Twilight Zone."