Celebs Show Their Claws & Get Catty for Halloween

Cuz we luv Yesteryear’s Hollywood, and cuz we’re an unapologetic cat lady, we thought we’d give a nod to the holiday by sharing a treat bag of celebs who dared to show their strong “felines” about Halloween. (Ouch!) 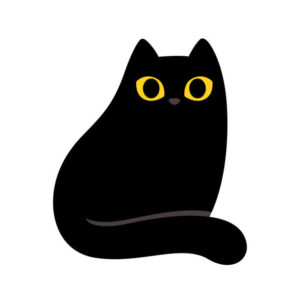 We start with screwball comedy film fave Carole Lombard – who did a whole series of snaps with this black beauty. Alas, Lombard was just 33 when she died in a 1942 plane crash while on a war bond tour. She was then Mrs. Clark Gable. 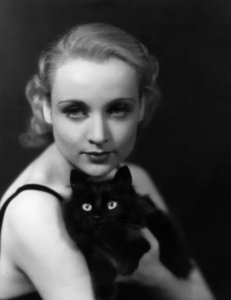 Nancy Carroll – all dolled up as a kitty cat – transitioned from silent to talkies and was especially busy in the Thirties. Heck, she was Oscar-nominated for 1930’s “The Devil’s Holiday.” This photo is from 1935. (P.S. She went on to do TV in the Fifties.)

Leila Hyams, with the art deco cat statuette, was a 1930s showbiz veteran. A child of vaudeville, she’ll forever be known for her daring work in the still-shocking 1932 film “Freaks.” We believe this photo was taken several years later. 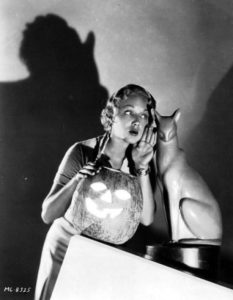 The snap of the kitty-costumed Paulette Goddard is a publicity image for her 1939 horror-comedy (co-starring Bob Hope), “The Cat and the Canary.” 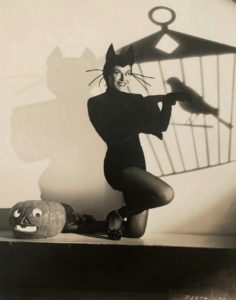 Also looking catty is Dusty Anderson, who appeared in small roles in the Forties – and was a hugely popular World War II pin-up. (She was often in the pages of Yank magazine.) She wound up marrying director Jean Negulesco, who was known for his work in CinemaScope. 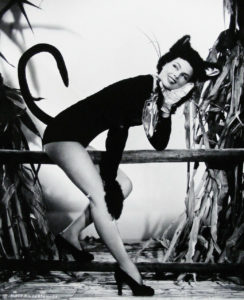 Familiar to fans of Sixties-era TV for her role of Lily Munster in “The Munsters,” stunning Yvonne De Carlo had a successful career in crime and costume dramas of the Forties and Fifties. Her kitty pose atop the giant pumpkin is from 1946. 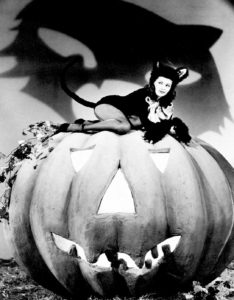 We’ll wrap it up with the ever-fabulous song and dance (and legs!) gal Ann Miller. An MGM favorite, Ann posed for this shot in 1949. 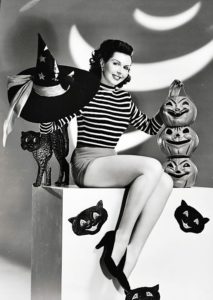