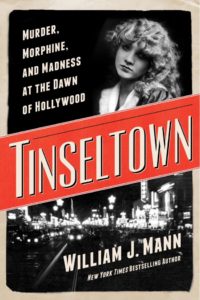 The baffling 1922 murder of director William Desmond Taylor gets true-crime treatment in Tinseltown, (Harper, 2014) a compelling interweaving of star power, the machinations of power brokers and the desperation of the wannabes and the washed up. Together they provide the book’s apt subtitle: “Murder, Morphine, and Madness at the Dawn of Hollywood.”

Celebrity biographer William J. Mann, whose subjects have included Barbra Streisand and Katharine Hepburn, delivers a stirring narrative set against the Roaring ’20s. Movies may have been silent, but they loudly generated big stars and big business. Did they also undermine moral decency? Religious leaders thought so. They further frowned at headlines about stars in trouble with drink and drugs. Taylor’s murder was one more scandal.

As president of the Motion Picture Directors Association, the handsome, urbane Taylor had been a soothing industry mouthpiece. Privately, he was a man of secrets. They began unraveling with the discovery of his body.

A former disgruntled valet was among the suspects. Others included: comedienne Mabel Normand, a close friend of Taylor’s and the last person to see him alive; the delicate actress Mary Miles Minter; and Mary’s protective mother, Charlotte Shelby. For many years Shelby was considered the prime suspect. Then came a strange 1964 deathbed confession from the actress Margaret Gibson (also known as Patricia Palmer, among other names). Mann digs deep into Gibson’s ties to Taylor and her dealings with a group of Hollywood lowlifes.

He also reveals the lengths to which industry titan Paramount founder Adolph Zukor went to calm the public—and hide the truth. This happened in tandem with the rise of movie czar Will H. Hays, who became president of the Motion Picture Producers and Distributors of America, a post that found him working with community leaders and filmmakers to establish a decency code. Hays was going to clean up Hollywood.

As for that murder, Mann gives credit where credit is due—citing the work of other authors and scholars—before naming the killer. We won’t reveal the spoiler here. But, in the tradition of great mysteries, this tale is worthy of its own Hollywood movie.

In the tradition of great mysteries, this tale is worthy of its own Hollywood movie.