As the world grapples with the reality of the coronavirus pandemic there’s been considerable attention paid to fictional storylines. The now familiar roll call includes films like “Outbreak” (1995), starring Dustin Hoffman and an escaped monkey, and Steven Soderbergh’s “Contagion” (2011) and books by Dean Koontz, Stephen King and Michael Crichton (who had a day job as a doctor). But let’s not forget the granddaddy of the contemporary genre: the novel “Earth Abides.”

Published in 1949 – in the shadow of George Orwell’s masterwork “Nineteen Eighty-Four” – “Earth Abides” asked the unsettling question, “what if … ” in the devastating wake of a global killer virus.

Perhaps surprisingly, there had already been a spate of virus/plague-themed literary “what ifs” in the 1800s, including Mary Shelley’s “The Last Man” (1826) and Edgar Allan Poe’s “The Masque of the Red Death” (1842). The early 20th Century was marked by real life dramas – including the outbreak of bubonic plague in San Francisco (from 1900-1904) and the influenza pandemic of 1918. Then came the atrocities of two world wars – and Hiroshima. In the aftermath of the detonation of nuclear weaponry, anything seemed possible.

Within that context, “Earth Abides” could not be ignored. George R. Stewart, a U.C. Berkeley English professor, had already written a harrowing narrative account of the ill-fated Donner Party and two fictional works involving natural catastrophes. With “Earth Abides,” Stewart took a futuristic leap. The book’s title and theme come from the book of Ecclesiastes, 1: 4, “Men go and come, but earth abides.” 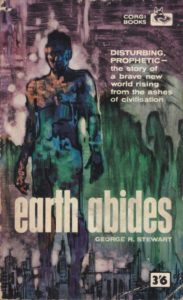 Published by Random House (the first edition will run you $499 on eBay, if you can find one!), the book followed the exploits of Isherwood “Ish” Williams, a young Berkeley grad student. Bitten by a rattlesnake while on a geological camping trip in the Sierras, he spends days in delirium in the wilderness. Returning home two weeks later, Ish is stunned to find empty streets and abandoned cars, and to discover that a viral pandemic has killed most of the world’s population. He survived because the snake venom proved to be an antitoxin.

Isherwood’s story is told in three parts: the immediate aftermath of the virus; his travels to discover who else might remain alive (the neon signs in a deserted San Francisco are still flashing – though in time,  technology will sputter and die); and, through his eyes as an old man, a tribal society with new taboos and superstitions.

If critics of the day didn’t do handstands, they recognized a powerful story. The Miami Herald cited the “masterful job of narration.” The Chicago Tribune called Stewart “a storyteller possessed of singular power and imagination.”

“Earth Abides” quickly became a best seller, and in 1951 received the International Fantasy Award – a precursor of the Hugo Award. Serialized in newspapers across the country by the Newspaper Enterprise Association (NEA) Service, it enjoyed multiple reprintings.

To this day there are myriad critical musings about the book, which manages to straddle topics as diverse as ecology (a prescient subject in 1949), archaeology (as a new civilization emerges), and even Biblical teachings, all while evading feel-good optimism for most of those whom the protagonist encounters. 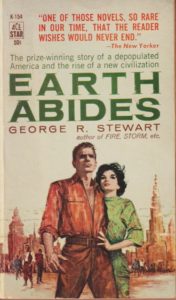 An example: Milt owned a jewelry store in New York City; Ann was a salesgirl for a perfume shop. Coming together post-virus, they spend their days drinking warm martinis and listening to records on a hand-cranked player, choosing to live in the present, instead of thinking about the past – or what lies ahead. Driving through Manhattan’s desolate streets, Ish “doubted whether they could survive the winter, though they had piled broken furniture into the fireplace. Some accident would likely overtake them, or pneumonia might strike them down. They were like the highly bred spaniels and Pekinese who at the end of their leashes had once walked along the city streets. Milt and Ann, too, were city dwellers, and when the city died, they would hardly survive without it.” He has tears in his eyes as he heads toward the next destination.

Hollywood loved end of the world plotlines in the Fifties and raided from “Earth Abides,” though the book was never officially adapted for the big screen.

It did become the basis for a 1950 two-part drama for the CBS Radio program “Escape,” and jumping ahead, it was read over 10 segments (of 15 minutes each) for Canada’s CBC Radio program “Booktime” in 1983.

It’s become a pervasive online presence, generating study guides, even Pinterest boards. Did we mention that you can buy it on Kindle?

George R. Stevens wrote more than 35 books. His obituary hailed him as an “educator, poet, novelist, onomastologist (expert on names), ecologist, geographer” and more. But it’s for his once-startling sci-fi entry that he is best remembered.

“Earth Abides” stands as an important genre entry – shaping the end of the world as we know it, fiction-wise. You could call it a viral sensation. 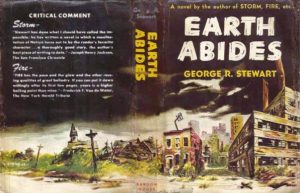 After reading “Earth Abides,” Jimi Hendrix became a sci-fi devotee. Stephen King has cited the book as inspiration for his hefty (1,000 pages!) 1978 post-apocalyptic saga “The Stand.”